I am an introvert and I will tell you I hated it every time people told me to be more open, to talk more and to socialize more. I am extremely comfortable in my own skin now after having spent a large part of my life in confusion trying to figure out if I am an alien in my world which is mostly inhabited by outgoing people.

I know about myself that I thrive in my interactions with like minded people and will just be nodding my head to the point of exhaustion when with other types of people. I avoid social gatherings most of the times because it is mostly about dressing up, discussing clothes and jewelry and gossiping, areas I am least qualified in. Therefore, you know that if I am there, I would have made great efforts on my part.

I have witnessed similar traits in Dhruv over the past years where he would just stick to me constantly asking for my attention, remain busy playing alone in his own world within the security of my presence and never trying to make friends. Coming from my childhood and growing up experiences, I think I understood him much better and he is doing fine at present.

During the initial days after the school reopened this year, Dhruv one day told me, after he came back from school, that he is a shy person and he does not speak much. I am not sure if his teacher told him so or whether he picked it up on his own from a random conversation. That day I heard him attentively and gave it a deeper thought. Who knows it better than me the ills of being labeled a shy child? Next day, I discussed with him with an intent to change his inner dialogue.

I wanted him to think about himself as a warm and kind person who takes a little extra time to observe people around him and once done with this he is the most friendliest person.

I convinced him with examples from the numerous times when I have observed this about him in various extracurricular classes we have both attended. I made him see that the shyness he is experiencing is because those were still the initial days of the new school year with new children in his class and things will change for better with few more days passing. This came as true and after a week or so he couldn’t just stop chattering about his and his classmates’ mischiefs.

In case you ask me what I have done or am doing to make him more friendly and for developing his social skills, I think I am not doing anything prominently in this direction. I don’t think he should be going out and mingling with every kid or grown-up if he is not comfortable with. My main idea for him is to feel at home the way he is and accept himself.

The thing which is important here is he must have a positive self image and self-confidence because then everything else tends to follow suit.

Never let him miss his play-time in the evening –

Getting together with his group of friends and playing with them in the evening is never compromised unless it is raining hard. The physical aspect of playing keeps him stay happy and improves his concentration. There are testing days when the boys end up quarreling or cornering someone or the other and it becomes a learning process for Dhruv to deal with his emotions. Sometimes I intervene, many a time I do not. It is crucial for him to fight his small battles on his own.

Nowadays, schools do a lot from the very beginning in making children accustomed to aspects beyond academics. There are frequent individual and group activities held in his class. If there is any topic to be spoken upon in the class, Dhruv always wants to go prepared and I am more than happy to make my contribution.

There are group dance performances in the apartment complex at various times and it comes from within him to participate. My role is to facilitate his reaching the right place at the right time on the first day and then he takes it from there.

One thing that needs to be worked upon now is a solo performance given the fact he does not have stage fright.

With full-time school, there is no time for extracurricular activities now but until last year when he used to be back home from school by 12.30 pm, we were a regular to after school classes on most weekdays. He has done 2 levels of phonics and 1 level of grammar in addition to kids cooking classes. Learning new skills is a great confidence booster.

These days we are more into attending weekend book events and storytelling sessions at a book store in our part of the city.

I try to be watchful for any negative self-talk that creeps into him and work around it to create a positive message. I also work on staying aware myself in case I am resorting to labeling him. Focusing my energy on his positives and giving him instances, funny and insightful from my school days and beyond have been quite helpful.

With all these efforts, there has been visible improvement in his personality compared to earlier times. I hope both of us are able to sustain it in the future also.

This post has been written for the #MondayMommyMoments prompt for this week – Share the ways to make an introvert child more friendly or to boost their confidence.

Linking this post to #MondayMommyMoments hosted by Deepa Gandhi and Dr. Amrita Misra

This post earned me the award of being the ‘Featured Mom’ for week 36 of #MondayMommyMoments . 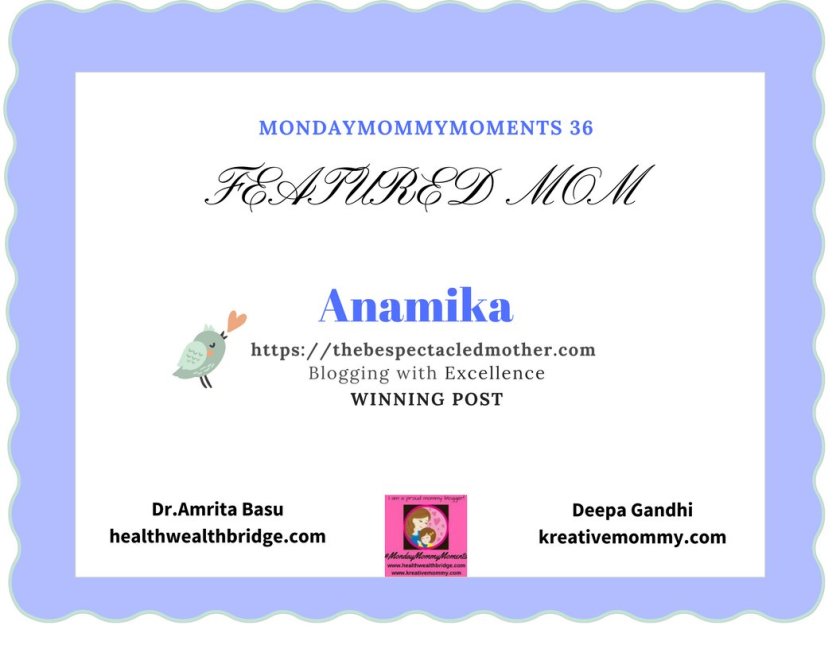