May 29, 2015 the bespectacled mother Storytelling 11 comments 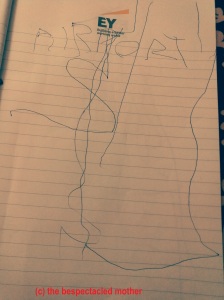 What appears to be random scribbling here are actually roads. Few are one ways, few are connected but all the roads lead to Airport. The word AIRPORT got written here because Dhruv agreed to take help from me by the way of holding his hand in writing it otherwise he likes to do things by himself.

First the letter T was made. T was having a bath and it wanted to take a shower. So the lines above it were made as shower. Then T became happy.

In this pic, Daddy H Mumma H and Dhruv H are going for a walk with all three holding hands.

3 Hs of 3 different sizes were made in this pic with common lines in between. The first one from the left was the tallest, that was daddy. The middle one short, that was mumma. And the last one, the shortest was Dhruv.

This figure was a round-about. Later he told me it is letter O.